So, Bush issued his end-of-the-year press conference where he readily admitted that we might not be winning…. (*Winning*, are you kidding me?)

Why is it that a mind-numbing juvenilia concept like “winning” can masquerade as political discourse, making it to the front page in slightly-larger-than-normalcy news type of the NY Times; the LA Times, The Post, etc?

One possible explanation: the gesturo-haptic. Brian Rotman’s 2002 article argues for a new mode of “writing” and inscription that is displacing alphabetic inscription. The gesturo-haptic is a form of writing that is connected to a developing lexicon of embodied movement made possible by new forms of media like motion capture. {Just think: how many dancing, silhouetted bodies have you seen on advertising banners of late, hm?}

Along these lines, Brian Massumi describes the misuses of “affect” — the autonomically inflected gap between content and effect made possible by mediated images (actually affect is more interesting than this, but for the purposes at hand…). He describes Ronald Reagan’s success as rhetor in these terms: “Reagan politicized the power of mime. That power is in interruption. A mime decomposes movement, cuts its continuity into a potentially infinite series of submovements punctuated by jerks…Each jerk suspends the continuity of movement, for just a flash, too quick really to perceive — but decisively enough to suggest a veer…. Reagan operationalized the virtual in postmodern politics….He was an incipience. He was unqualified and without content. But the incipience that he was, was prolonged by technologies of image transmission, and then relayed by apparatuses, such as the family or the church…. They selected one line of movement, one progression of meaning an implanted it locally. (read more Massumi) 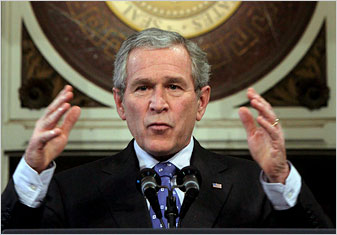 “The emphatic glare”: the problem here is that the interruption is filled by that blank stare, followed by that I-really-do-remember-what-word-comes-after-“the” chuckle.

Or, “The pause and head shake, followed by the quick stab of the hand”: I recognize this form of affect from sports bars on a Sat night. It translates roughly as, “masculine aggression has its smart side too….” In embodiment speak, of course.

Can you blame us for intuitively registering that “winning,” collecting as it does naturally around such haptic gestures, comes across as pretty heady stuff?

You are currently reading Miming Think at Jen Boyle.